Not your regular implant and veneer case comes through the door!

Patient presents in pain pointing to his front tooth on the top (tooth #8). X-ray shows a rare internal resorption of the tooth. In other words, it was being eaten away by the body from inside. This is usually caused by trauma to the area, which can be from as far back as 30 years!!! After the tooth was carefully removed, not to disturb the surrounding bone, an implant was placed and allowed to heal for several months. The old tooth was splinted in the space so that he didn’t go a second without a tooth. Later on a crown was placed on the implant and a veneer was placed on the tooth next to it to give a better appearance. The patient was so happy he screamed! He is currently undergoing Invisalign treatment to get the full smile he deserves after realizing how important it is and finding a doctor that he trusts. I was very proud of his patience and optimism throughout the process. Are you 100% happy with your smile? 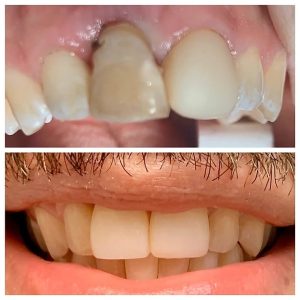 June 1, 2020
Dr. Paolo Saggese
Uncategorized
No Comments
We are very excited to announce that as of Monday June 1, 2020 Governor Cuomo has determined that dental practices statewide can reopen for all services!  We are looking forward…
Read More

May 14, 2020
Dr. Paolo Saggese
Uncategorized
No Comments
I am often asked how long each treatment is expected to last.  Below is a list of the 10-year success rate for some common treatments according to numerous randomized clinical…
Read More

May 9, 2020
Dr. Paolo Saggese
Uncategorized
No Comments
1. How did I get periodontal disease? Gum (periodontal) disease is caused by a sticky film of bacteria called plaque. Plaque is always forming on your teeth, but if they…
Read More
Menu